Radovljica, or Radol’ca as it is more affectionately known, may not be as well-known as nearby Bled, but it boasts a wide range of sights and activities, and also offers something that its more famous neighbor simply can’t: peace, quiet and a relaxing medieval town atmosphere. 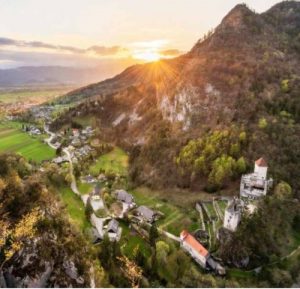 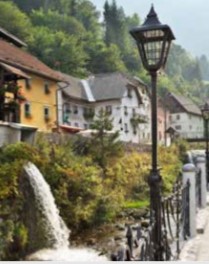 An administrative center since the 16th century, today the municipality of Radovljica comprises some four dozen individual settlements and nearly 20,000 people. At the center of it all, and of most interest to tourists, is the picturesque old town situated on a hilltop overlooking the Dežela plain to the east and the Sava river valley to the west, with perfect views of the Julian Alps dominating the background in seemingly all directions. The compact city center is a veritable open air museum of beautifully restored buildings, narrow sloping streets and pleasant sidewalk cafés. The wider area is home to countless hiking and cycling paths, some great accommodation options (including an award-winning campsite and several old town guest houses), an airport offering scenic flights and the Bled-Lesce train station. All of this, plus the genuinely welcoming spirit of its residents, should lead many visitors to consider choosing Radol’ca as their base for the region and making Bled a day trip, rather than vice versa.

LECTAR GINGERBREAD MUSEUM: Gostilna Lectar’s very own living museum makes a traditional Slovene craft, gingerbread from honey dough. The hospitable family, dressed in everyday medieval clothing, will give you a tour of the museum. Tools dating back over 100 years are still used to produce these uniquely decorated cakes and the oldest preserved wooden mould is from the 16th century. Back in medieval times they were considered prestigious gestures of romance, these days they make great gifts and can be personalised. Info: Linhartov Trg 2, +386 (0)4 537 48 00, info@lectar.com.

LINHART SQUARE (LINHARTOV TRG): The town’s main square is one of the best-preserved medieval squares in Slovenia, and home to the majority of its sights, the tourist information office, several cafés and even a couple of accommodation options. Named for Anton Tomaž Linhart, an 18th-century playwright, historian and Radovljica’s most famous son, who among other achievements penned the first Slovene comedy, the square is lined with historic buildings dating from the 15th to 19th centuries and is a veritable open air museum of different architectural styles. It was renovated and turned into a pedestrian-only zone a couple of years ago. The square also hosts the largest chocolate festival in the country every April.

RADOVLJICA MANSION: Originally built by the wealthy Counts of Ortenburg in the middle of the 15th-century in what was then a small German settlement, nowadays Radovljica Mansion dominates the upper section of Linhart Square and is one of the centers of cultural life in the region. Expanded and renovated over the centuries, much of its appearance dates from the mid-17th century, while the High Baroque façade was added in the early 18th century. In 2002, the premises were completely restored and refurbished with locally sourced materials, and it is now home to part of the permanent collection of the Municipal Museum of Radovljica and the Apiculture Museum. However, the mansion’s single most famous element is likely the glorious Baroque Hall on the first floor, with sweeping views of the mountains in the distance it is a popular venues for weddings, concerts and other events. Info: Linhartov Trg 1, tel.  +386 (0)41 69 50 11, www.radolca.si.

HOP-ON HOP-OFF RADOL’CA: While the hop-on, hop-off tourist bus concept is a familiar sight in most of the world’s major cities, it’s not often that you see such a thing in rural areas and small towns. However, Radovljica’s forward thinking tourist office has realized that this is the perfect way for visitors to discover some of the region’s hidden corners and off the beaten path venues. Operating from the beginning of July till the end of August, every Tuesday the bus makes four circular journeys along a route covering Bled, Radovljica, Begunje, Podvin and Brezje, before returning to Bled via Radovljica, taking in all the sights along the way, while on Thursdays the route is Bled, Radovljica, Kamna Gorica and Kropa. Special guided tours and other activities can also be arranged in advance. For more info and full programme see the website of Tourism Radovljica.

KROPA: This little village is a hidden gem tucked away in the narrow Lipnica valley below the Jelovica plateau, a 20-minute drive south of Radovljica. Kropa’s rich technical heritage and unique preserved architecture led it to be the first settlement in Slovenia to be named as a protected cultural monument. Known as the cradle of Slovene iron-forging, the area was a busy industrial hub with numerous small scale foundries and ironworks operating between the 14th and 19th centuries. The Iron Forging Museum is full of informative displays covering the whole process of working iron as well as the social, economic and historical development of Kropa.

BEGUNJE NA GORENJSKEM: Sitting in the foothills of the spectacular Karavanke Mountains and Kamnik Alps, Begunje Na Gorenjskem, or just Begne to the locals, first appeared in the historical records around the 11th century. The village and surrounding countryside is rich in natural beauty and cultural heritage including a number of significant archaeological sites. At the heart of Begunje is the impressive Katzenstein Mansion and gardens, the onetime home of the Lambeg Counts. Begunje is also famous for being home to Elan, one of the world’s leading ski manufacturers, and Slavko Avsenik, a pioneer of popular Slovene folk music.

TIC RADOVLJICA: Radovljica’s tourist information center can be conveniently found near the main entrance to Linhart Square in the old town. Located on the ground floor of a restored home known as the Mrak House, the office provides a whole host of information and services for the town, municipality and entire Gorenjska region, including accommodation, excursions, maps and tickets. It also has a wide selection of typical Slovene souvenirs, as well as products made under its own brand, such as honey and homemade chocolate pralines with traditional potica cake filling. Free guided tours of the old town depart from here every Tuesday throughout the year at 10:00. Info: Linhartov Trg 9, tel. +386 (0)4 531 51 12, fax +386 (0)8 205 13 36, info@radolca.si, radolca.si. 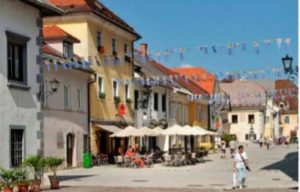