Perched on a rocky promontory at the confluence of the Sava and Kokra rivers, the old town of Kranj has one of the most spectacular medieval skylines that you’ll likely ever see, with its three distinct church towers and an unreal backdrop of the Slovenian Alps rising up only a few kilometers to the north. 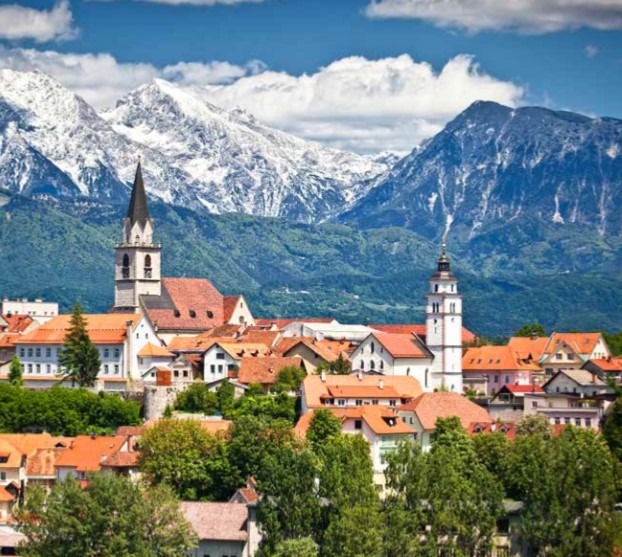 Not as well-known as Bled or as heavily trodden by tourists on Kranjska Gora, in most senses of the word Kranj is still the true capital of the Gorenjska region, both historically speaking and nowadays, as it has long-served as one of the main industrial centers of Slovenia and is also the country’s fourth largest city.

Thanks to its ideal position at the foothills of the mountains but also only a short commute (20km) to Ljubljana, Kranj is a popular place for young families to settle down, as property prices are a bit more reasonable here than in the capital, and an abundance of shopping centers and other modern conveniences have been built in recent years.

Of course it’s Kranj’s historic center that is still the main draw for most tourists and day trippers. Protected as a national cultural monument since 1983, the lively old town boasts a variety of diverse sights, from religious monuments and ethnological museums to modern arts spaces and unique remnants from World War II. For most Slovenes the city is inextricably linked with the nation’s greatest poet, France Prešeren, who lived and worked here in the mid-19th century.

KHISLSTEIN CASTLE & THE MUSEUM OF GORENJSKA: A key element of Kranj’s magnificent medieval skyline and quite literally an inseparable part of the town (as the complex’s lower section forms part of the defensive walls), Khislstein Castle derives both its name and Renaissance appearance from its 16th-century owner Janez Khisl. Historical records show that other fortifications were built on the same site as early as the 5th century, while excavations of the castle’s foundations have unearthed artifacts going all the way back to late Antiquity. More recently the castle and its grounds were extensively renovated in 2012, when the open-air summer theatre was built and the Museum of Gorenjska’s central exhibition was opened on the premises. Titled Beautiful Gorenjska, the comprehensive and extremely well presented exhibition leads visitors on a journey from the geological formation of the region millions of years ago, through prehistoric settlements, the arrival of Slavic tribes, development of Slovenes as a distinct people, growth during the medieval and renaissance periods, and concludes with modern Slovenia’s accession to the European Union. Special emphasis is given to several other important areas such as the ethnology of rural life in the region, including both the hardships faced and social triumphs, the notable individuals of the 19th century, both World Wars and the Yugoslav era. The space of the castle’s interior is used to maximum effect, and some interesting and novel curatorial approaches make a visit here both fascinating and informative. As such, the museum is great place to begin a first trip to the region. Info: Tomšičeva 42, tel. +386 (0)4 201 39 50, www. gorenjski-muzej.si.

KRANJ BY THE NUMBERS:

KOKRA RIVER CANYON: While most visitors admire Kranj for the breathtaking panoramic views of the mountains to the north, the first inhabitants chose to settle here not for its natural beauty, but for the more practical reason that the 30m deep gorge immediately to the east provided a significant defensive advantage. Carved into the colourful conglomerate sedimentary rock at the end of the most recent ice age, the lush green canyon is home an extremely diverse collection of plants and animals, and has been a protected natural site since 1983. For those who would like to explore the area themselves, the most easily accessible public entrance is next to the bridge on Poštna Ulica, and the tourist office stocks a very informative brochure that includes a maps as well as details about the areas flora and fauna, geological history and the milling industry that flourished here until the early 20th century. During the summer months several rocky beaches found along the riverbanks are popular destination for swimmers or those just looking to escape the heat.

PREŠEREN PRIZE WINNERS GALLERY: Since 1947 the Prešeren Awards have been given to Slovenia’s leading artists on the national day of culture, which is on 8 February in commemoration of the great poet’s death, and are considered the highest national honour in the field of the arts. Some 140 works by past winners of the so-called Grand Prešeren Award (given to two artists) and the Prešeren Fund Award, also known as the Small Prešeren Award, (given to up to six artists) are on display here at the municipal gallery located in the labyrinthine 16th-century Pavšlar House. The premises themselves are almost as interesting as the award-winning artwork, with original frescoes, exposed wooden Renaissance ceilings, clay brick floors and numerous other architectural embellishments. Info: Glavni Trg 18, +386 (0)4 202 57 16, gpn@kranj.si, www.gpn.kranj.si.

LAYER’S HOUSE: The one-time home of Kranj native and lifelong resident Leopold Layer (1752-1828), a prolific Slovene painter, has recently been transformed into a beautiful multi-use arts space, which features a cool café with sweeping views over the old town walls, a museum with several permanent exhibitions, and even a few gorgeous residences that are intended primarily by visiting artists but can also be hired by tourists. The first-floor museum is divided into three parts, with one room boasting walls covered in restored 19th-century frescoes, another showcasing an impressive collection of works by Layer himself, while the third is devoted to the life and work of Janez Puhar, who was a pioneer of early photography and is credited with inventing a novel method of capturing images on glass in 1841. Elsewhere in the house there is a small gift stocks some unique souvenirs, and there is also additional space for workshops, lecture and other events. Info: Tomšičeva 32, +386 (0)31 37 92 37, info@layer.si, www.layer.si.